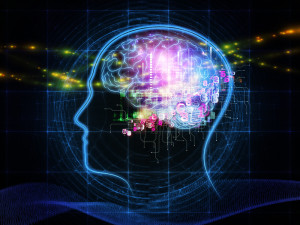 I am a stroke survivor…

and had planned to share my experience on this blog at some point, but when I saw this article Monday morning from United Press International, Inc., “Most younger people with stroke symptoms would not go to ER” I did a quick Google search and found similar articles published recently in The Washington Post, WebMD and ScienceDaily and decided now was the time.

A recent survey by Ronald Reagan UCLA Medical Center shows that most young people (under age 45) would wait to see if stroke-like symptoms improved before seeking medical attention. If you are having a stroke, waiting is the worst thing you could do. “There simply is no time to wait. It’s a message that we clearly need to get to younger people more effectively,” said David Liebeskind, MD, professor of neurology, Director of Outpatient Stroke and Neurovascular Programs and Director of the Neurovascular Imaging Research Core at Ronald Reagan UCLA Medical Center.

On August 22nd, 2012 at age 37, I had left work and was driving to pick my children up at Boys and Girls Club. I suddenly had the sensation that my view of the world outside my front windshield was slowly turning upside down. I pulled off into a parking lot and called my fiance to explain, as best I could, what was happening to me and that I did not think I should be driving. He left work, picked up our kids and came to get me. This only took about 15 minutes and by the time they found me I was vomiting into the parking lot landscaping. I got into the car and continued to vomit out the open window as he drove me to Providence Regional Medical Center in Everett, WA.

The ER doctor asked questions like, “Have you taken any illegal drugs?” and could not discover what was causing my symptoms. I had a headache, which had been bothering me consistently for the past month so they gave me an MRI. The images showed a blood clot in my left vertebral artery which had partially dislodged and hit the left side of my medulla (lower half of the brainstem). After I was admitted to the Intensive Care Unit I had a second stroke. This one did the most damage. I had walked into the ER on my own power, but the second stroke damaged my sense of balance so that I could no longer walk on my own, or swallow normally. 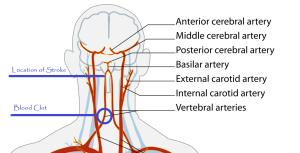 Click to enlarge – Location of blood clot and stroke

Over the next four days physical therapists, occupational therapists and speech therapists visited me in the hospital. I had multiple MRIs, MRAs, CTs, and EKGs. Eventually, I regained mobility by using a walker and a belt, held by my physical therapist and wrapped around my waist, to keep me from falling. My body seemed intent on leaning to the left. Also, I had to add Sysco Instant Food Thickener to anything more fluid than applesauce or I would feel like I was choking. Without the thickener, I would have violent coughing fits which made it very difficult to breathe.

Why Did this Happen?

After four days I was released from the hospital with a walker, safety belt and a sack full of instant food thickener packets. My hospital physician referred me to Dr. Major, a neurologist at The Everett Clinic. He was extremely helpful in describing how and where my clot and stroke occurred. Both the doctors at Providence and Dr. Major agreed that my month long headache was directly related to the clot and most likely caused by a wooden roller coaster at Silverwood Theme Park, the Timber Terror. They believe that the jerky motion on that roller coaster shook my head around enough to cause a slight tear in my vertebral artery (vertebral artery dissection – VAD), resulting in the blood clot. My month long headache had begun immediately after riding the Timber Terror.

Getting Back to Normal

I began to take low dose aspirin daily, my headaches became bearable and about a month later I was able to walk normally again. Additional MRIs showed the clot had dissolved and blood flow in my artery was returning to normal. I was cleared to drive and return to work.

Today, I have only a few residual effects. I tape my left eye to keep it closed while I sleep since my optometrist noticed that my eye was drying out and becoming damaged from remaining open as I slept. The hearing in my left ear is reduced, but I have been reluctant to have it checked for fear of needing a hearing aid. Below the neck and to my waistline the effects are on the right side. I can no longer feel heat or cold, but instead feel sensations of pain from cold raindrops or cold hands on my skin. Heat doesn’t hurt but also doesn’t “feel” hot or warm, so I have to use my left hand to check the temperature of bath water or showers. Swallowing is also still an issue. If I don’t pay attention as I swallow, the coughing fits return. Even this morning I had a fit after eating a bowl of cereal. The outcome could have been drastically worse and I am thankful that these are the only effects of the strokes. I feel very fortunate to have recovered so well.

I will never ride the Timber Terror again, or any other jerky wooden roller coasters, but I also believe there were other contributing factors to the tear and clot in my artery. Genetics, birth control hormones and a history of smoking were also against me.

If you have any of the following symptoms, get yourself to an ER immediately, even if the symptoms subside.

Use the acronym “FAST” and do the following:

Don’t wait to see if symptoms go away. Every minute counts. The longer a stroke goes untreated, the greater the potential for brain damage and disability – from the Mayo Clinic: Stroke, Symptoms and Causes. 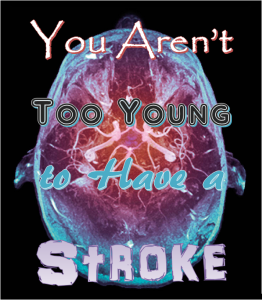